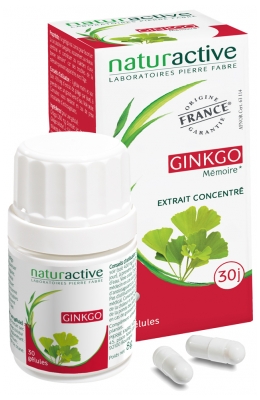 This item is currently being restocked at our warehouse. Please subscribe to our availability alert system to be notified when it becomes available.
Your e-mail address is incorrect.
In stock
Home delivery
From 29th October 2021
View all available delivery methods for this item
Country of delivery:
Buying this product gets me
£0.11 on my loyalty card

Other available size for this item

Naturactive Ginkgo 30 Capsules is a food supplement in form of capsule based of Ginkgo Biloba which allows to favor the blood circulation also on the brain and contributes to maintain a good memory.

This food supplement contains Ginkgo which the leaf is used as it has specific components, ginkgolids. They are associated to flavonoids and anti-oxidants. These components explain thus the beneficial action of Ginkgo on the cerebral circulation. It enhances a better oxygenation of the brain, the concentrate extract of Ginkgo participates also to the maintain of memorial capacities.

Take one capsule morning and evening with a large glass of water.

Reserved to adult. Do not use during pregnancy or lactating.

The brand Naturactive provides the best of nature for health and well-being, following the principle that nature can offer to everyone the essential things to maintain or establish his balance.

Naturactive cultivates and selects plants in the respect of natural environments and in a constant preoccupation to save the diversity of plant species.