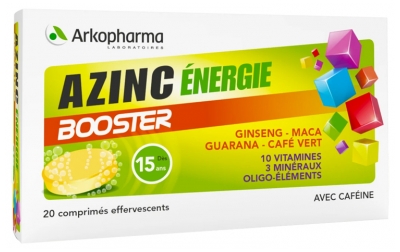 by Arkopharma / Azinc
20 Tablets Box
£7.50
Price per kg/L: £107.14
Item temporarily unavailable
Your e-mail address is incorrect.
Only 0 left in stock

Arkopharma Azinc Energie Booster 20 Effervescent Tablets is a food supplement in form of tablet based of plants, vitamins, minerals and caffeine, with sweeteners.

This food supplement contains an innovating association of 10 vitamins, 3 minerals and trace elements, 4 extracts of tonifying plants (Ginseng, Guarana, Maca and Green Coffee) including a guaranteed content in caffeine of 65mg per tablet, which assures you a "boost" action. It contains thus :

- Ginseng and Guarana which participate to reduce the tiredness.

- Maca which is an energizing root of the Peruvian Andes and which helps to stimulate the vigor and the physical and intellectual performances.

- Green Coffee which participates to the support of physical performances.

- Natural Caffeine which contributes to reinforce the mental performances throughout the day and has tonifying properties.

- Vitamins B1, B2, B5, B6, B9, B12, C associated to Magnesium which contribute reduce the sensations of tiredness and help to fight against the tone decreases.

- Vitamins B2, C and E, Selenium, Zinc and Manganese which contribute to fight against the oxidative stress at the origin of cell ageing.

- Vitamin B5 that helps to maintain good intellectual performances.

- Vitamins A, B6, B9, B12, C, D, Selenium and Zinc which participate to the good functioning of the immune system.

Reserved to adult. 1 effervescent tablet per day, ideally in the morning during the breakfast, to dissolve in a large glass of water. Avoid the take wit an empty stomach or after 16H in reason of possible onset insomnia.

It is recommended a during of use of 15 days, renewable.

Arkopharma Pharmaceutical Laboratories are specialized in phytotherapy and food supplements. In 2010, they celebrated their 30 years of expertise.

They propose a large choice of natural products (with plant basis) responding to all the daily inconvenience and pains: diet, joint comfort, heavy legs, urinary problems, tone and vitality, lack of magnesium,....

Arkopharma Pharmaceutical Laboratories work in the respect of a quality policy, in the domain of phytotherapy medicine (BPF Certificate) and in the domain of food supplements, dietetic products and cosmetics (Iso22000 Standard & Bio Ecocert label).