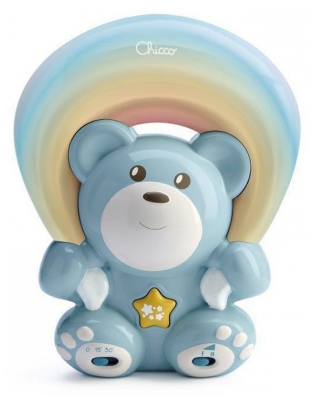 This item is currently being restocked at our warehouse. Please subscribe to our availability alert system to be notified when it becomes available.
Your e-mail address is incorrect.
In stock
Please select your colour
Home delivery
From 23rd August 2022
View all available delivery methods for this item
Country of delivery:
Buying this product gets me
£0.43 on my loyalty card

Chicco First Dreams Rainbow Bear 0 Months and +  is a customizable rainbow projector on the wall and ceiling.

There are 2 projection and melody modes:

The projection has an automatic cycle which varies between 15 and 30 minutes.
The projector has a rear hatch with a curved mirror to customize the width and direction of the projection depending on the room and the location of the object.

The projector develops the musical sensitivity and visual abilities of the child:

Before use, please read the labels and warnings on the product packaging carefully.

Created in 1946 in Italy by Pietro Catelli, the Chicco brand supports millions of children aged from 0 to 36 months worldwide and contributes every day to their happiness. Elaborated with strict specifications, Chicco ensures that the products marketed are safe, reliable and meet high quality standards. Find in our selection, the best sellers of baby care products such as baby bottles, soothers, breastfeeding accessories, and other accessories that make baby life easier.