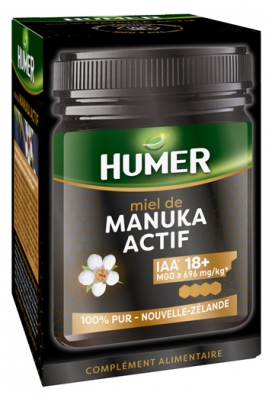 The item is currently being restocked in our warehouse, please subscribe to our availability alert to be notified of its availability.
Syntax error in your email address.
In stock
Home delivery
From March 11th, 2021
View all the delivery methods for this item
Country of delivery:
By buying this product, I benefit from:
£1.15 on my loyalty card

Humer Manuka Honey Active IAA 18+ 250g is a dietary supplement based on Manuka Honey. Its particularity comes from its high content of methylglyoxal (MGO), a compound derived from the nectar of the flowers of this southern plant, Leptospermum scoparium. The beneficial properties of honey are multiplied tenfold.

This honey gets its exceptional properties from compounds coming from the plant:

The concentration of Humer Manuka Honey Active IAA 18+ in MGO is greater than or equal to 696mg /kg.

Cookies Policy
Continuing your navigation, you accept the use of cookies that will allow us to offer contents and advertising linked to your interests.
Learn more

Subscribe to the newsletter to benefit from our privilege offers
×