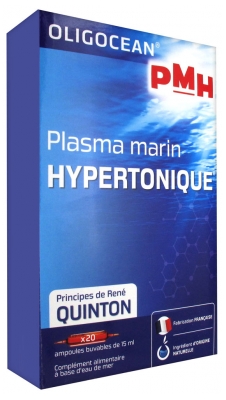 The item is currently being restocked in our warehouse, please subscribe to our availability alert to be notified of its availability.
Syntax error in your email address.
In stock
Delivery at home
From June 3rd, 2020
View all the delivery methods for this item
Country of delivery:
By buying this product, I benefit from:
£0.26 on my loyalty card

Description
Oligocean Hypertonic Marine Plasma 20 Phials is a food supplement with sea water, produced in France, according to the method of René Quinton.

Sea water is defined by its salinity, that is to say its content in dissolved salt. The salinity can vary according to the latitudes but its particularity is its constant composition. Generally, we find in this water 33g of salts per liter.

The French biologist René Quinton studied with passion the properties of sea water, and the similitudes between marine plasma (sea water) and blood plasma. The Oligocean phials have been elaborated according to his method.

Use
Take outside of the meals, pure or diluted in 1/2 glass of water.
Take 1-2 phials per day during maximum 21 days, stop one week and then take 2 phials per day maximum during 21 days.
To maintain, take 1 phial in the morning before breakfast during one month, 4 times the year.
If you are pregnant or breastfeeding, ask for your doctor.
If you have a low-salt diet or kidney and heart diseases such as hypertension, ask for your doctor.

Brand of the French Laboratory Super Diet, Oligocean produces food supplements based of sea water. The brand formulates its products with sea water, also for its salt (1 liter of water = 33 grams of salt) and for its resemblance to human plasma. The products Oligocean are rich in trace-elements and in mineral salts which allows them to reduce tiredness (mental and physical) and contribute to your good health. The products of the brands are from natural origin and are certified ISO 9001 and ISO 22000. Sea water contained in the supplements is collected in the Bréhat archipelago in Brittany on the protected Natura 2000 site.

Continuing your navigation, you accept the use of cookies that will allow us to offer contents and advertising linked to your interests.

Subscribe to the newsletter to benefit from our privilege offers
×