All you need to know about royal jelly’s natural goodness 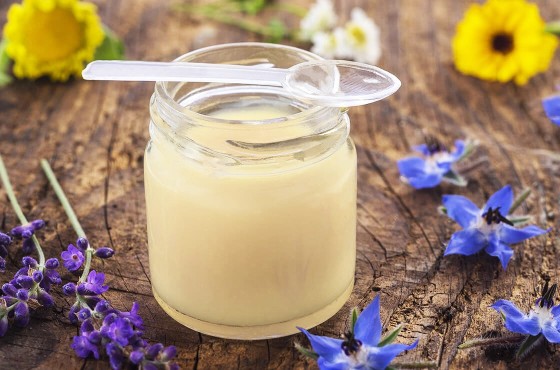 As the sole food of queen bees, royal jelly is the beehive’s most precious and rarest product. What are its properties and how to use it best?

What is royal jelly?

Royal jelly is a pearly white gelatinous substance that can sometimes be slightly yellowish and is harvested by beekeepers. It has a high level of acidity (pH4) and its taste – in its fresh form – is a bit similar to that of honey albeit without the latter’s sweetness.

How is royal jelly made?

Royal jelly is secreted by nurse workers – that were formerly worker bees – during the second week of their life. They produce it using their hypopharyngeal (which only worker bees have) and mandibular glands. Royal jelly is meant to feed all the larva during the first three days of their life then only the larva that are meant to become new queens, until their fifth day. It also is the sole food queen bees eat for their entire life.

Did you know that queens live a really long life – that is 4 to 5 years – on the scale of bees? Worker bees only live a month and a half! The queen is also six times heavier than the other bees, which gives royal jelly its excellent nutritional qualities.

What is royal jelly made of?

Royal jelly is made of the following components in approximative proportions:

Royal jelly or propolis: can you tell the difference?
Propolis is a blend of wax and plant resin that bees use to line their hive: in addition to having antiseptic properties, it seals and strengthens the structure. Propolis is traditionally used to heal minor winter ailments, especially sore throats.

The many benefits of royal jelly

Royal jelly has been used for centuries in Chinese medicine for its effects on longevity and sexual energy. In the Western World, it is considered as an elixir that, when given orally, stimulates immune defenses, regulates the metabolism and fights tiredness and memory loss. It also stimulates hair and nail growth. Externally, royal jelly is used to prevent wrinkles, dry skin and eczema.

Acetylcholine, one of the active components that can be found in royal jelly, is a neurotransmitter that acts on the nervous system, learning activities and memory. That explains why royal jelly is used to enhance memory and fight depression.

Those are not the only actions royal jelly is famous for though. Here are some more examples of its benefits.

A study conducted in 2004 on postmenopausal women has confirmed the action of royal jelly on the production of estrogens. This product alleviates the symptoms linked to menopause (vaginal dryness, tiredness, headaches...)1.

Several in vitro studies (including one conducted in 20062, for instance) seem to demonstrate royal jelly’s immunostimulant properties, even though that hasn’t been proved in vivo yet.

Other studies3 have shown the effects of royal jelly on cholesterol: they underline that the latter increases the amount of “good” cholesterol (which is called HDL) compared to that of bad cholesterol (LDL).

A study conducted in Japan4 showed that royal jelly made mice more resistant during sporting events by lowering the build-up of lactate and ammonia and by better retaining the glycogen after the trial. That’s why royal jelly is strongly recommended to sportspeople.

Are there any contraindications to absorbing royal jelly?
This natural product is totally harmless for most users, considering the small doses it represents. People who are allergic to the other hive-related products (honey, propolis, balls of pollen...) or to specific pollens should be careful though. If you tend to have hay fever, asthma or eczema, check with your GP or pharmacist before taking royal jelly. As a precaution, you should also avoid eating it if you have hormone-dependent cancer (such as breast cancer) because of its effect on the production of estrogens.

How to eat royal jelly?

Which form to choose?

You can enjoy it fresh, in vials or in dry extracts.

Fresh royal jelly can be kept for a few months in its glass vial (its acidity would otherwise damage the other materials) in the fridge.

If it’s fresh or contained in a vial, royal jelly has to be put under the tongue in the morning, before breakfast, for better absorption (1 gram maximum). When taken in freeze-dried form, just read the manufacturer’s instructions.

Which products can you blend it with?

To improve its taste and get a synergy of positive effects during a course of treatment involving royal jelly, the latter is sometimes blended with other active ingredients such as honey, ginseng, guarana, acerola or other healthy products.

To benefit from royal jelly’s anti-ageing action on the skin, you can use creams that contain a sufficient amount of jelly (and not too many other ingredients).

To support the growth and vitality of hair, royal jelly is better taken orally.

A course of treatment involving royal jelly lasts from three weeks to a month and a half. It has to be done two to three times a year.

So as to fully enjoy royal jelly and its many benefits, Cocooncenter offers a selection of products whose quality has been carefully controlled. From food supplements to capsules, through vials and creams, you’ll certainly find the product your body needs.

Our selection of royal jellies

If you follow a course of treatment at seasonal changes or whenever you feel tired, you’re preparing for an exam or a sporting event, you’ll have much to thank bees for! 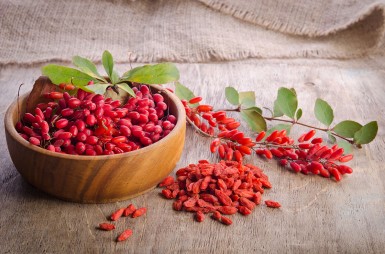 The goji berry: all you need to know about this super healthy fruit
◀◀ 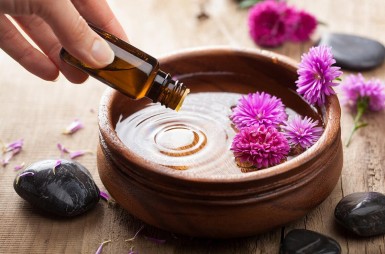 Aromatherapy: a short beginner’s guide
►►
You will also like